The right front fender that was originally on the car was badly smashed, so a replacement was needed. It has turned out to be pretty difficult to find a good right front fender locally. They turn up on eBay all the time, but I don’t want to pay $100 to ship a fender across the country. The fender on the Biscayne parts car was fairly hammered too, but not beyond saving. It was a last resort to use this fender, but it is proving to be a good learning experience to repair it. 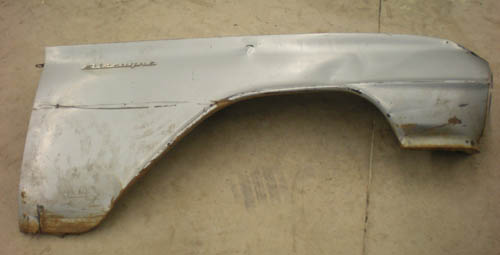 Right front fender before being repaired.

As can be seen in the “before” shot above, it was wrinkled in a few spots, creased in another, ripped in one and a piece cut open to access the rusted-out fastener. After a lot of hammer and dolly work, heat shrinking and tweeking, it is getting close to usable. Still need to do more work with it, and of course weld up those other issues. I sprayed some DP primer on the majority of it because I didn’t want it sitting for too long in bare metal…. and I ended up with some extra DP in the paint gun that I was going to have to use-up or throw away, so the fender was my target! 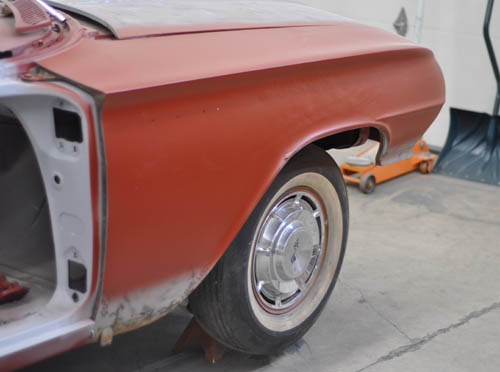