FINALLY… The body is painted! Three coats of acrylic urethane and it’s finally all one color. I painted this a little later in the season than I’d like to have. Since it’s been getting colder outside and I need to suck fresh air into the shop while painting, I wanted to do this while it was still in the 60’s outside. Unfortunately I’ve run out of time and I can’t wait any longer, so I just did it… even though it was only about 50 degrees outside. The shop furnace did a decent enough job keeping the temps up to a workable range, but the fact that the side of the car nearest to where the air was coming in was probably a good 5-10 degrees cooler than the other side, is far from ideal. I suspect this contributed to why I ended up with some runs on that side of the car… the paint wasn’t “kicking” as fast as the rest, so even though my paint wasn’t necessarily going on any heavier than anywhere else, I ended up with some runs just below where the bottom paint divider trim goes. No big deal, I can fix it! I think it’ll sand out just fine. Also, I got some solvent-pop on the top surfaces… so all along the top of the quarters and in front of the trunk opening. Again, I think the colder temps contributed. I was not waiting long enough between coats, since it was curing a lot slower than normal. Applying the last coat, the solvent-pop dimples appeared. They look kinda like fish-eyes, but not as deep.  But, I can fix it! When I color-sand, they should all come out. They aren’t deep, I think just in the final coat of paint. Of course I got plenty of dust again. Painting in my shop is certainly not the cleanest environment, but it’s ok… I can fix it! It’ll be gone when color-sanding.

I used 28oz of color to finish the body, that’s the quarter panels, rocker panels, top of quarters and the tail light panel area. So far I’ve used a total of 50 ounces of color doing all the shiny parts (not counting the door jambs, firewall or inside the trunk). I have 78 ounces of color left, which will be enough to finish the doors, hood, front fenders, trunk lid and other small bits. However, it doesn’t leave me any room for mistakes! I already bought the extra quart that I used for the jambs, etc, so the full gallon I bought would have BARELY gotten the job done, if not come up a bit short. Hindsite being 20/20, I should have bought a gallon and a half all at one time. Then I’d have cross-mixed them to guarantee it would all be the exact same shade. As it is, the extra quart I bought is slightly more creamy colored. Not exactly happy about that, but since the areas it was used are separated from the rest, it doesn’t really show. The most noticeable area is were you can see the rear door jamb against the quarter panel (see pic).

The tape line between the door jambs and the quarters came out okay, but not great. I used the 3M aperture tape, which is designed for this job. However having used it now, I can see that this stuff probably works a lot better with basecoat than it does with single-stage. When shooting basecoat, its thin… a LOT thinner than single-stage. So by the time I piled on 3 coats of paint, it started to bridge the tape in a few areas which makes for a harder line than If I had just masked it off with regular tape!  Oh well… I was able to knock the edge off by rubbing along the line with my finger after I unmasked the car and pulled the tape off. Paint was still rubbery enough to do that. Good thing I opted to unmask everything before calling it a night! Trying to knock that edge off with sandpaper would have been difficult.

Overall I’m pretty happy with the result. Definitely need to color-sand and buff. It has enough defects that it’ll need it, but I was already planning to do it because I really like that super flat and glossy “show car” look. It’s why I put on three coats, not two.  One thing I’ve learned about doing this in my shop without a paint booth…. next time, build a paint booth! Especially if I’m doing a base/clearcoat job. With so much dust, some of it is bound to be visible if it were entombed inside a clearcoat.

The body of the car, finally in paint! Still have to do the black stripe. 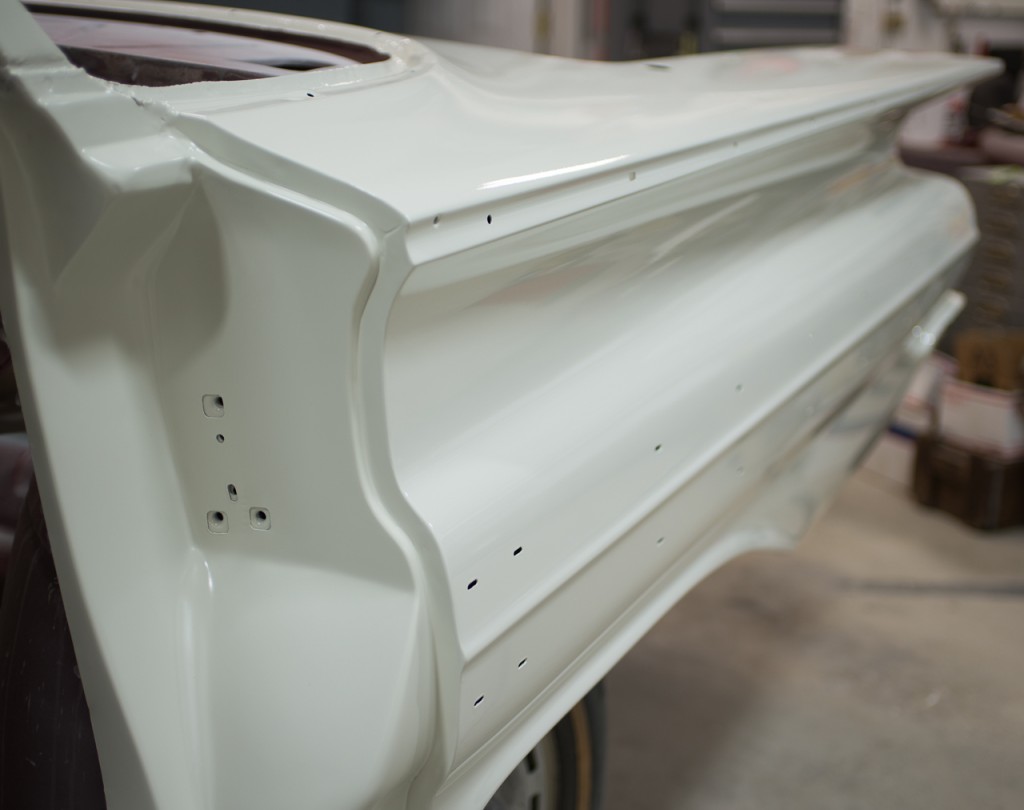 Glossy quarter panel up against the satin finish door jamb for a factory-ish appearance.