After coming to the conclusion that the body IS indeed on the frame straight, I had no choice but to move on with aligning the doors on the drivers side, somethign I hadn’t really touched too much yet. To my horror, I discovered that the door gaps on the drivers side are much tighter than the passenger side. So much so that it wouldn’t allow me to have the fender on that side flush up against the rocker panel like i had on the passenger side, which resulted in nice tight gaps, so I thought I was mostly done over there!  Confused, I started looking at some old factory photos of ’60 Chevy’s from back in the day, to see how Chevrolet did the fender-to-rocker gaps. Turns out, they were inconsistent… sometimes they had the fender right up against the rocker, other times they had a gap, with the leading edge of the door being flush with the leading edge of the rocker.  I opted to move the doors on the passenger side forward, and pull the fenders forward…. this gave me nice door gaps on the drivers side, but big ugly ones on the passenger side… i’d have to deal with that later. 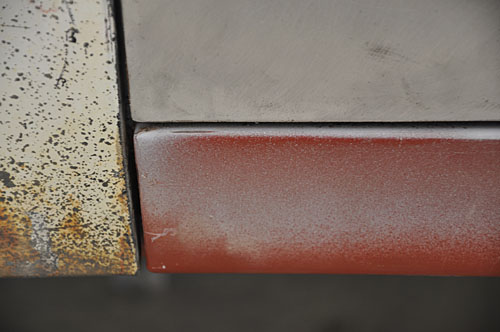 During the process of moving the doors forward, I also moved them inward a little, to tighten up the fender-to-hood gap. A very odd thing happened when I did this.. I was able to get the front sheetmetal to center over the frame properly and still line up with the doors nicely! Eureka! All this time, I’ve had the front sheetmetal cocked off to the passenger side by a good 1/2″ from the center of the frame.  With this discovery made, everything began looking real good.. EXCEPT those big door gaps on the passenger side. Well, I solved that problem with some more tig-welding rod! I chose to extend the rear of the front door. This allowed me to move the rear door back to where I had it before, with a nice tight gap at the back, while filling the gap up a little in the middle to compensate. Came out looking great! The gaps on the passenger side now match the ones on the drivers side… nice and tight, better than factory! 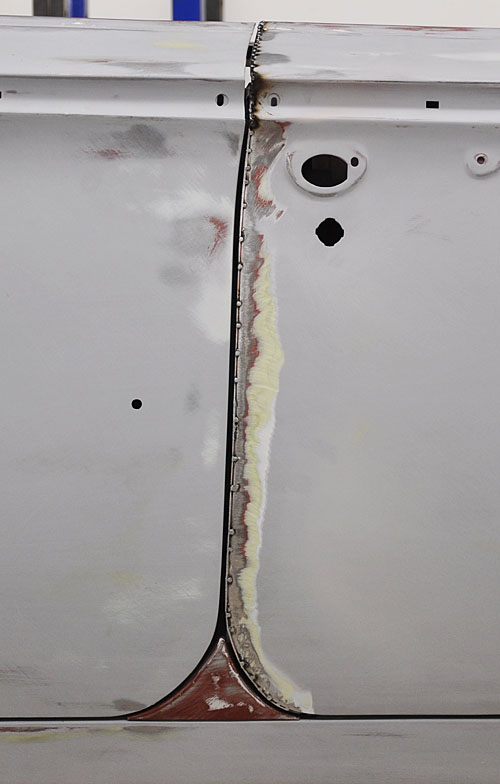 I still had that messed up gap to fix on the drivers side rear door, so I tackled it too with the same tig-welding rod technique. I haven’t fix the mis-aligned trim holes yet though. 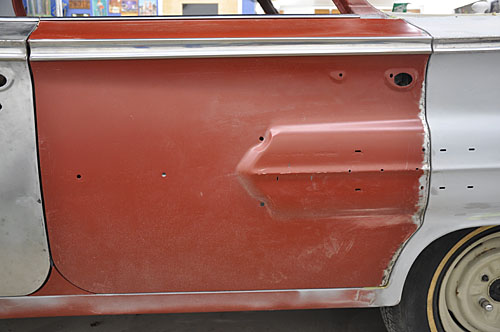 The only remaining gap and panel alignment issues I still have to deal with, is how the hood sits… it does not sit totally flush with the fenders, it is raised up about 1/16″ through the middle, but is flush at the back and front corners. This is within factory specs, so I may end up just leaving it…. I’m very tired of all these alignment and gap issues! At some point you gotta just say GOOD ENOUGH!