The various numbers that will allow you to identify your differential are highlighted in the photo below.

The identification code will tell you the gear ratio, if it is a posi, and in some cases what engine and transmission the car is equipped with. It is located on the right hand side of the case and is composed of two letters. This code is marked with RED in the location photo above.

The ratio may also be determined if the ratio tag is still in place. This tag location is marked with PURPLE in the location photo above. Each ratio has a different shaped tag associated with it. They are as follows:

Please note that the 3.36 and 3.55 tags sold by Late Great Chevy are mis-identified, being swapped one for the other. The guide above is correct.

The Assembly date is found on the right hand side of the case and consists of four digits. This code is marked with GREEN in the location photo above. It indicates the month and day in the format of “MM DD“… for example, 10 03 would indicate October 3rd. The year is not indicated in this this location.

The casting date is located on the left hand side of the case between what looks like two screws. This code is marked with BLUE in the location photo above. It will consist of a letter followed by two or three numbers. The Letter identifies the month, starting with A to represent January, progressing through L which represents December. The following one or two numbers indicate the day of the month, and the last number indicates the year… for example, 0=1960 and 4=1964. See these examples of complete date codes:

Remember, your 1960 Chevrolet or many of its components may have been made late in 1959. However, if your date code is from late in 1960, you may not have the original part that it came with from the factory

The casting number is located on the left hand side of the case and consists of seven numbers. This code is marked with YELLOW in the location photo above. For 1960, there should only be one of two numbers to choose from. If you have a different number, your case is not originally from a 1960 Chevrolet. For a non-posi-traction unit, this number should be 3725899. For a posi-traction it should be 3743833. These casting numbers were used from 1957-1961, so you can not rely on them alone to know if your differential is from a 1960 Chevrolet. You will need to combine this with the Casting Date code mentioned above. Corvettes also shared this same differential.

If your case has a giant letter P on the left side (as seen in the location photo above), then it may very well contain a posi! Another indicator may be a metal ring around the filler plug on the back of the axle housing. This metal tag is shown in the photo below. It is often missing. 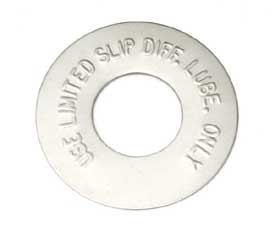