Here I am again, after another long delay between blog updates. Just haven’t had much time lately to work on the car. Finally though, I made it out there this past week! I was able to get the filler work pretty much done on the drivers side. The quarter panel was already done, but both doors and the front fender (side of it) were not. It looks like a lot of filler to the person who doesn’t know how bodywork is done these days. But the fact is… the filler is on pretty thin. No thicker than 1/8″ and for the majority of it, not even that. Its used to fill the waves in the sheet metal, not the dents! Dents you take out with the stud-gun/puller or body hammer and dolly. Anyway, its pretty level now. I’ll check it over again before I do the final sanding to prep for high-build primer.

So check it out… I had much of the filler work DONE when I noticed a TINY, and I mean TINY dark dot on the lower rear corner of the front door. Uh-oh! Rust? I poked at it with a sharp chizle and it punch right through, as shown in the pic. Just goes to show… you can THINK you have it all removed and replaced with fresh steel, but you can miss one tiny bit! If I had covered this up with paint, it would have certainly turned into a tiny blister under the pain in a short time. I tried to zap the thing with the welder, because the area around it seemed solid, but the metal was just too thin and kept blowing out when I tried to weld on it, so I ended up doing like Mike Holmes would do. Just tear it out and make it right! You can see what was behind it! Yuck! The lesson? From now on, whether the metal seems solid here or not, cut it out and re-do it, you cant see it but its going to be rusting away behind this area of EVERY door on EVERY ’59-’60 Chevrolet!

After welding in the new patch, I finished the filler work. Sheesh! Still have to do some more filler work on the hood in a few areas. Very mild waves in it, what a pain that will be! Then, the trunk lid needs a lot of work… ouch. 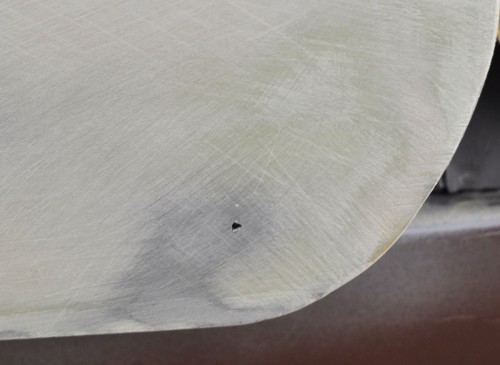 One last rust dot found, just in the nick of time! 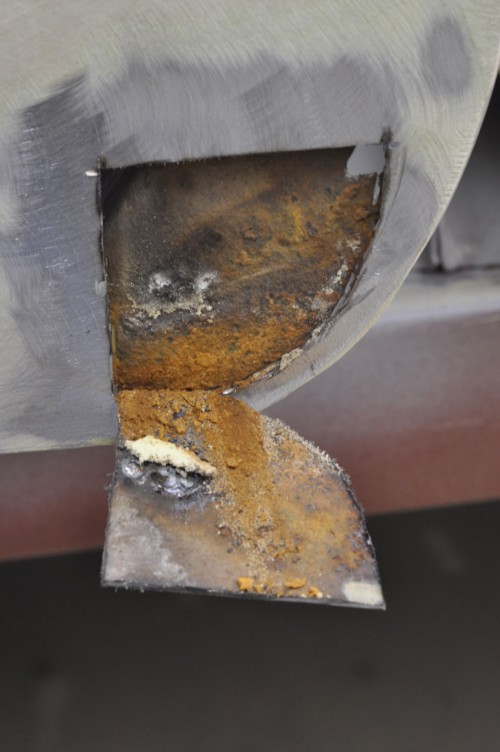 Rust hole in door, opened up! 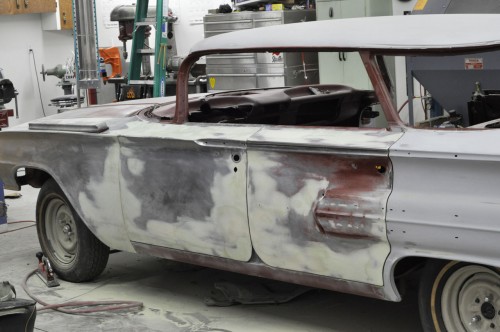 Filler work done on drivers side.