↓
Home Menu ↓
Skip to primary content
Skip to secondary content
Home→ALL→July 2012 update, and prepping the bottom of the hood

No, I haven’t given up on the project! Many other things going on in life and business have left me with very little time to put into the restoration of this car. But, yes I HAVE been working on it. A little here and a little there. The bodywork is getting much closer. Filler work is finished on everything but the trunk lid. I’m cleaning up the bottom of the hood and the door jams (on the doors) before I put on some high-build primer. My goal is still to get SOME paint on this car before the summer is out. Maybe it’ll only be on a door or a hood or whatever, but there WILL be some paint on it, damnit!

The latest work I’ve done, involves prepping the underside of the hood for semi-gloss black paint (as per factory). A while back I stripped most of the undercoating off with the use of a propane torch to lightly heat it, then scrape with a putty knife. This did a pretty good job, but still left traces of it that needed to be removed with a rag and some lacquer thinner. Once I had it clean, I used the DA sander and some 80 grit paper to strip it down to bare metal. Some hand sanding in areas where the DA wouldn’t reach was required. 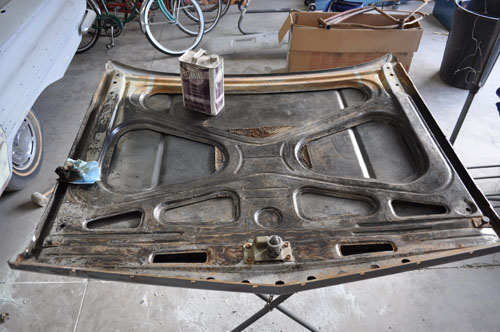 The underside of the hood before I cleaned and stripped it.

Under the hood lip on the drivers side, the flat area with the holes in it was creased from the light collision damage that the hood recieved at some point in its past. I was easily able to repair the outer surface of the hood, but the inner was still creased. I could have left it, who would notice? I would! So I used the Unispotter and a body hammer to get the crease as flat and normal as I could, then skimmed it with some body filler (as seen in the photo). I’ve got the body filler blocked out and the whole underside of the hood is now ready for some primer (not shown). I’ve ordered up some Eastwood 2k Ceramic Underhood Black that I’ll use to paint the bottom of the hood, inner fenderwells, core suppoort and associated bits. As I understand it, this is supposed to be a very close match to the gloss level that the factory would have used. I’m undecided yet, if I want to paint the bottom of the hood now, or wait until I have all my primer/blocking work done, so that I don’t have to worry about masking it off. 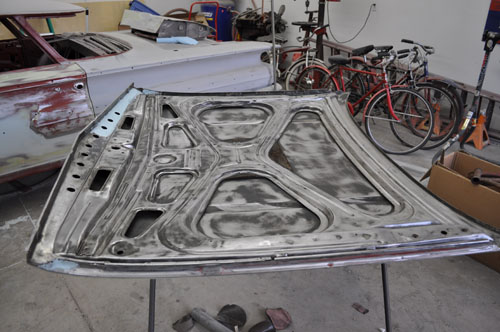 The underside of the hood after it was stripped and some body filler applied to a problem area.